Sight from The Skynet: Irene Våtvik and her Art Irene Våtvik, was born in 1951 in Sandnessjøen, but today she lives in Asker in Norway. As a child she was often ill which led to many hospitalization where she spent a lot of time alone. She therefore created her own fantasy world, a creativity that she has brought along in life. Her own experiences made her curious of other people and their inner world.  She developed a strong empathy for suffering people, and as an adult, she educated herself as a nurse and then specialized herself to become a psychiatric nurse. Through her work she became interested in creative treatment in the psychiatry and therefore she began part-time studies at Asker School of Art from 1994 to 1998.

For eight years  she was working with groups using art in expressive therapy. In addition she has held several courses about this topic. Irene Våtvik is, as we may see, a versatile artist who in addition to express herself through the art, also has extensive experience in how art can be used in psychiatric treatment.  In other words, this is an artist with a broad expertise in the field of art. Irene Våtvik is also an artist with many expressions; she creates collages, makes drawings , pastel pictures and more, but in recent years she has been working mostly with collages. Våtvik has also had several separate exhibitions , and in 2016 she attended a public exhibition in Fredrikstad and at Heggedal Hovedgård in Asker. As an gateway to this exciting artist we will analyse the work Sight from The Skynet from 2017 which we also will put in an art historical context.

Sight from The Skynet

Sight from The Skynet was made in 2017. Looking closer, we find a lot of elements in the image. Among others we see two women figures; one en face and one in profile. This is not the only difference; the women are also in different stages of life and maybe from different periodes of time, or even though from different  cultures. We find organic forms, looking like clouds which is placed evenly throughout the picture and partially covering the women. It's like a Veil of Maya, and in that way it creates a sort of illusion; what are we seeing and what is it that we think we see. The woman en face is covered by the "cloud" over her right eye while the left part of the forehead is covered as well. In the Greek tragedies such as King Ødipus the blind one was the one to "see", meaning be the wise one, and thinking of this we have to ask ourselves to what degree the wisdom is present in this image and where to find it. We know that the right side of the brain is the part that represents creativity while the other side represents the logical and rational. Although they cooperate through corpus calossum, there is a clear devision, so how are we going to read the partially covered face? The logical side tries to obtain information by looking into the surroundings, but since the logical part of the brain is partially covered, we have to ask ourselves the extent to which information can be processed. With regard to the creative side, the eye is covered, and even though, according to the Greek tragedies, the wise is blind, it is the wrong eye that is covered here.

In addition we find a kind of a net which covers most of the people in the picture. Unlike the person described above is the person we see in profile almost in full shape. This person is more diffuse, but it is a person with long hair, she has a kind of a hat on her head, and she is dressed in some kind of a coat. The hands seem like they either are folded or placed in a muff. Hence, the assumption is that the two women are from different periods of time or different cultures. The person en face is also just depicted from the chest and up, and appears to be from our time, based on the face and style of hair. The net, as previously mentioned, also covers most of the person in profile, and the net has the shape of a heart. Outside the net, we also find the organic shapes which we can associate with clouds, and in addition we also find some brown dots.

How to interpret this image?

To interpret this image, we first have to think of the title; Sight from The Skynet . Våtvik gives us a hint about what she wants to express in this image; it deals with all the communication currently taking place online. For a communication to be successful, it depends on both the verbal and the non-verbal communication.  When we communicate through social media we lose the non-verbal communication which account for over half of the communicate situation. The possibility for misunderstanding is therefore always present. That's the reason why we use emojis like smileys, flowers, hearts and so on, to compensate for the lack of body language. But is it enough? Hardly, and that's why Irene Våtvik succeeds very well in her expression dealing with communication via the network. By making one of the two persons diffuse so that it is difficult to place the person both in time and age, and the other one with partially covered face, it is a good expression for all the information that disappears in the communication over the network. We are left with just an illusion of what it was all about.

However, can an expression be read beyond the artist's intended meaning?

Of course, although the title locks the interpretation to some extent, one must also be able to ignore the title and put it into another context.  Putting this image into an art historical context, women have been painted in various ways throughout ages, and some have provoked and created strong reaction. Leonardo's Mona Lisa created great resurrection because the viewers felt that she was looking directly at them, which was not common at that time. The portraits were painted in profile and not en face like Mona Lisa. When Manet painted Déjeuner sur l'herbe in 1863 it became scandalous because of the naked woman sitting together with several dressed men. This was the time when major changes occurred in Paris, and Manet managed to capture it before it was defined. The men in the picture imagine the so called flâneurs or dandy, who did nothing more than walking around in the streets of Paris. The woman in the picture was a symbol of the slightly shady business of that time.  Major reaction also happened in 1907 when Picasso painted  The girls from Avignon (Les Demoiselles d'Avignon) as well. It wasn't their faces looking like African masks that created the reactions. At that time, many artists were inspired by the African because they thought it was more original. What caused reaction dealing with Picasso's girls from Avignon was that it was certainly not innocent girls but prostitutes.

What about the women in Irene Våtvik's picture Sight from The Skynet? The image is very aesthetic in its composition and use of colours. There's no reason for reaction dealing with these women. However, what can be an alternative reading is to look how the women in this picture are partially covered which makes them a kind of invisible. Thus it is very easy to read the women's struggle into the artwork as well, and therefore, putting this image into this context, it can and should make reactions. In that case, they can be an contrast to Leonardo, Manet, and Picasso's women, or can they be seen as a rescue for them?

In a State of Recovering As mention before, for many years Irene Våtvik has worked with art expression therapy, and the art work In a State of Recovering from 2017  can be read in this context. We find the bird which can symbolize freedom, the whale as a symbol for protection, and we also find a person sitting in lotus position; the position for meditation. When meditate you have to clear your mind, leave all the stress behind. The water can be seen as an amplifier to the healing process. The composition creates balance in the image so that the viewers can feel the calmness as well. The whale has gained extra space and at the top we find the meditated human. In our busy time, it is important to sometimes stop, try to find the peace and hence the strength in ourselves, then we also will feel protected. Feeling protected is important for everyone, but if you are struggling with psychical issues it must be the most important to get well. The Whistleblower from 2017 is, like all other images to Irene Våtvik, very aesthetic at first glance. This is due to the carefully composition and use of colours. At the top of the image we find some birds that can remind us of cozy Christmas cards.  In the lower part of the image we find a head with a bird sitting on the top. The head looks like it belongs to a statue. In other parts of the picture we find abstract shapes at first glance, but looking closer we find the shape of a hand holding a revolver and the lower shape of a human being.  Since our brain always tries to find logical relationships, we see this as the person who is going to fire the gun. With the title in mind; The Whistleblower, the ambivalence and sublime feeling occurs. The bird on the head than becomes the symbol of the whistleblowers and the gun the symbol of the crimes committed. In Norway we first of all associate it with the tragic case where Monika, an eight year old girl was killed in 2012, while in other parts of the world there are a lot of other cases.   It is difficult to be alerts, something we've also have both seen and read about. We will nevertheless be very thankful to those who take that burden, and this artwork can be read as a support for those who dare to stand out. Finally we will take a closer look at the artwork Fragility from 2016. It is man's fragility that is on the agenda this time. Looking at the image it is very aesthetic, given by the composition and use of colours, but we also find an ambivalence looking closer. Primarily the right eye is covered. As mention before, this is the side of the brain that stands for creativity, therefore we can read it as a symbol that the creativity is dead, and going further as a symbol of depression. We also find words like "skjørt" (fragile) and "jeg" (I) in the image, while other words only partly appear, which can amplify the lack of comprehension to make peace of mind. The man is fragile and this image can be a reminder of that.

It is difficult to draw any conclusion when it comes to the art of Irene Våtvik, it is to diverse like the artist herself. And that's what makes the art so exciting, because it deals with so many aspects of life.

However here you can enjoy more of the artworks made by Irene Våtvik: Adventure under the Moonlight 2015 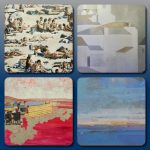