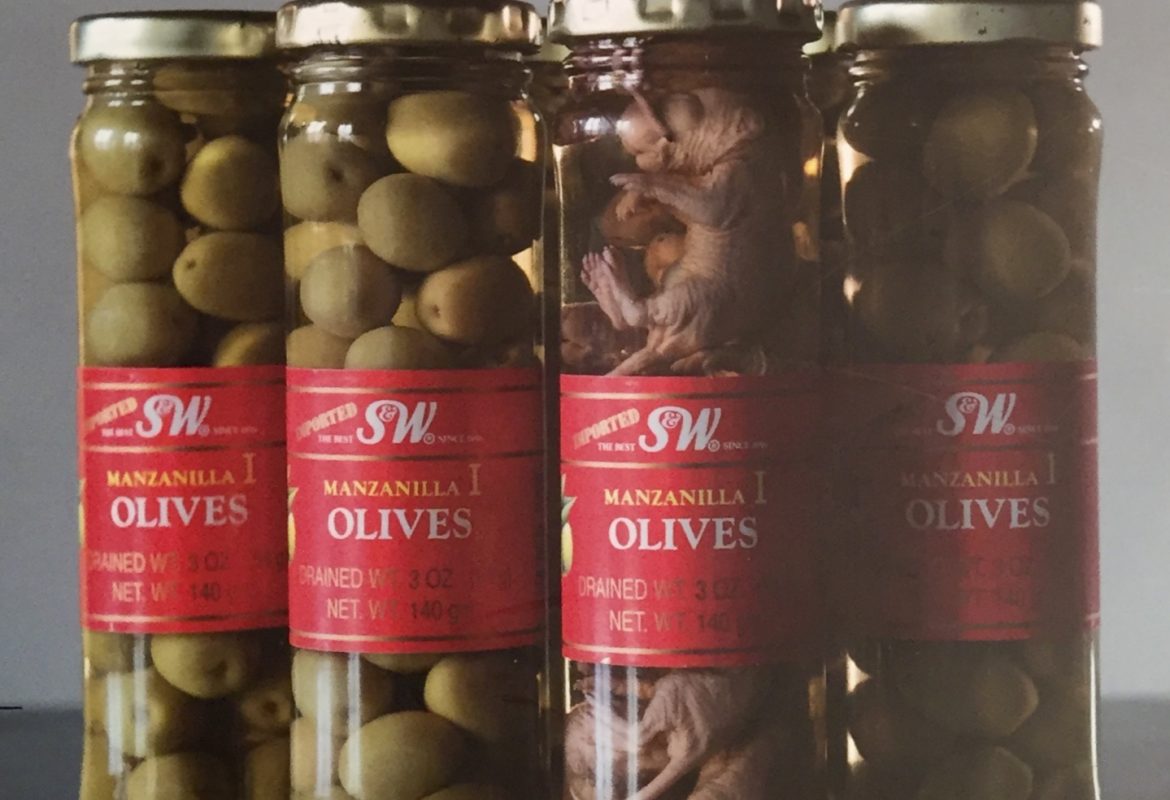 For norsk trykk her

Morten Viskum made his mark across the country when he in 1995 placed olive glasses with dead rats on formalin in several Norwegian supermarkets. When he some years later made a crucifix and replaced Christ with a dead rat , he received death threats.  It was at this time I became acquainted with  Morten Viskum, the artist who back then always was wearing a face mask in public places  so that one could not recognize him if you met him on the street. Our meeting resulted in the graduate thesis Rotten på korset (The Rat on the Cross) and ever since I have followed his art closely. From our first meeting I have never doubt that Morten Viskum would be one of our foremost artists from our time, and  that Love From God will enter the history of art as an icon from our time. I myself have used the art of Morten Viskum both in lessons and lectures, and I always bring "little rat" (a dead rat on formalin) with me, and even if someone have responded in a negative way, it soon has passed away when the background of the art expression has been known. Then the curiosity and the good conversation have taken place. The first international monograph about Morten Viskum and his art has now been published on SKIRA publishing. The author is Demetrio Paparoni and the title is MORTEN VISKUM Works 1993-2016. Paparoni brings with him many good collaborators such as Tone Lyngstad Nyaas and Jean Wainwright as the largest contributors but also Ernesto Sferazza Papa, Leonardo Caffo, Marie Loechen, Vincenzo Santarcangelo, Miranda Ferri, Marina Peruch and Davide Sisto, they have all been involved and have contributed so that the book has become such a great monograph about Morten Viskum and his art.

On the front cover we find the olive glass with dead rats together with common olive glasses. At the rear Morten Viskum is pictured while he is painting with one of the hands of a dead person. Viskum sees all his artworks as a residue of a performance, and here is one of his performances depicted.

Opening the book we are faced with a full-page image of Love from God. The work exists in several variations, and in this edition, it is a rat without a head, placed on the cross. At the base we find two heads of rats, one on each side, and in addition the chest is open. Knowing these works we also know that this is a stage in the dissection of a rat, but most people are not familiar with the works. The location of the two heads switch, however, with the convention of a dissection, in addition to the rest of the context, because a rat scarcely are being dissected on a cross, it becomes very special, one can easily connect it to Christianity and most people will also be able to call it blasphemy, and with good reason, until you get to know the reason behind this work. You feel the ambivalence, in one way it is repulsive yet it is very aesthetic. This is an ambivalence that characterizes Viskum's art. By opening with this image, Demetrio Paparoni put the standard of what to come; if we didn't understand it looking at the cover, it is confirm even stronger here; this is about art with a particularly strong expression.

The book is almost 400 pages, and more than half of it is devoted the works itself. This gives the reader a good opportunity to familiarize with Morten Viskum's art, which we shall talk about later, because this is the last part of the book. The first chapter is "Lessons in Anatomy. Morten Viskum" by Demetrio Paparoni. Paparoni starts by saying that we see it as perfectly normal opening a cadaver to find the cause of death, and also that past artists learned anatomy by studying corpses, and even by opening them. This is something we just have to agree on because it has always been known how past masters like Leonardo da Vinci and Rembrandt for instance learned their anatomy for use in art. The latter has also created the painting The Anatomy Lesson of  Dr. Nicolaes Tulp back in 1632.

Demetrio Paparoni then continues by putting the art of Morten Viskum in different contexts. Paparoni relates Viskum's early loss of his father to his theme of death that recurs in his works.  Paparoni also puts it in context with other artists who have experienced illness and death in immediate family. One of them is Edvard Munch, and we know of his painting The Sick Child which is about his sister who died only sixteen years old. Paparoni also put Soren Kierkegaard in to this context, which makes it extra interesting.

Other artists who join are Damien Hirst and Andres Serrano, which I also did in my thesis, but while I was doing it because of the ambivalence between the repulsive and the aesthetic in Damien Hirst's work Mother and Child Devided where Hirst shared a calf and a cow and lowered them down in glass containers with formalin, and Andres Serrano's work  Piss Christ, where Serrano lowered a crucifix into urin, in addition Paparoni does a comparison between Morten Viskum and Damien Hirst's "boxes", which is interesting.

Otherwise; Morten Viskum's complete series of eighteen pictures showing a complete dissection of a rat is to be found in this chapter. In addition the chapter is rich illustrated with pictures of Viskum's art, but also other artists including the aforementioned artist Edvard Munch. We also find Piet Mondrian's iconic way to full abstraction illustrated in this chapter, which shows that it was not easy even for the former avant-garde artists. Paparoni ties everything up against the northern European  culture.

Tone Lyngstad Nyaas is also concerned about the death as a theme in Morten Viskum's art, but in another way than Demetrio Paparoni. She begins by tying him up against the Ars Moriendi - term (the art of dying). Nyaas also put many of Morten Viskum's works in an art historical context.  She also look at the artist in relation to Andres Serrano and several of his works, such as Piss Christ among others. In addition she ties Viskum up against YBAs (Young British Artists), a loosely composed group that at the end of the 80s and early 90s were young and relatively unknown artists. The famous art collector Charles Saatchi helped make them famous. Aforementioned Damien Hirst belonged to this group and his exhibition Freeze was in many ways which started it all. This exhibition still have a place in contemporary art. Of course Nyaas also mentions Damien Hirst as a comparison to Morten Viskum, but also Marc Quinn who belonged to this group as well, and his piece of art Self from 2000 is here included. While Viskum has made regular casts of himself which he has staged, Quinn has made several casts of his head. Not necessarily something sensational in this, but that his casts are made of his own frozen blood, still causing reactions.

Viskum's self portraits get of course a big place, but there is plenty of other art works presented. We also find works from Morten Viskum's exhibition Immortal  from 2004, an exciting and great exhibition which I still remember very well, and of course the hands which Morten Viskum templates with, are well represented. And there is even more, but that you will find in the book.

As the title indicates, this is a conversation with Morten Viskum. Here Wainwright puts on stage both Viskum's works of art, but also his relationship to his father's early death and how this has affected him. We also get an insight to the person Viskum when he as a little boy found a dead bird. The grandfather who has meant so much to Morten Viskum also get space in this conversation.

As previously mentioned more than half of the book is devoted the works of Morten Viskum. Although not absolutely all of his works have been placed in this book, you'll find most of them presented here. They are sorted and categorized in a nice way. Prior of the series we also find a text that reviews and partly explains them, but not to such an extend that there's nothing left for the viewer. The text is an addition for the viewers to bring into their own analyses and interpretation of the works.  These texts are written by the co-authors, but in a few cases Morten Viskum also comments on his works. This includes the work Love from God.

Killing Fields from 2006 - 2007, is not a well known piece of art which Morten Viskum created after visiting Cambodia several times and heard about the atrocities.  Morten Viskum has even told me about this peace of art during one of my visits to Vestfossen, and it was an incredibly strong story to be told. I am therefore very pleased that this work is so well presented in this book.

First and foremost, this book is about Morten Viskum and his art, but Demetrio Paparoni and his coauthors also make it interesting by putting Viskum and his art into different contexts, ranging from art history to the contemporaries, and even Soren Kierkegaard is included into one of these contexts. The book makes you gain an understanding and insight in what is going on in the art world from the 90s to the present day, with some strands further back in time. That the book has given the works such a big place, is a big plus, and with explanations at the forefront of several of these works, you get the feeling to go exploring in your own Viskum exhibition.

Of course there will be those who will find something that could have been done in another way when it comes to this book, as with all other books; personally I would like to have Love from God on the cover, because it's my favorite work when it comes to the art of Morten Viskum, but that is purely aesthetic and not the book's contents. In addition I consider myself incompetent here, as my whole graduate thesis was based on this especially work. Anyway, this is a thorough and well done book about Morten Viskum and his art from Demetrio Paparoni. 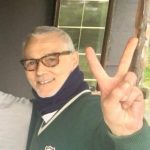 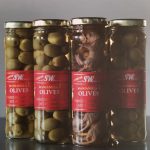