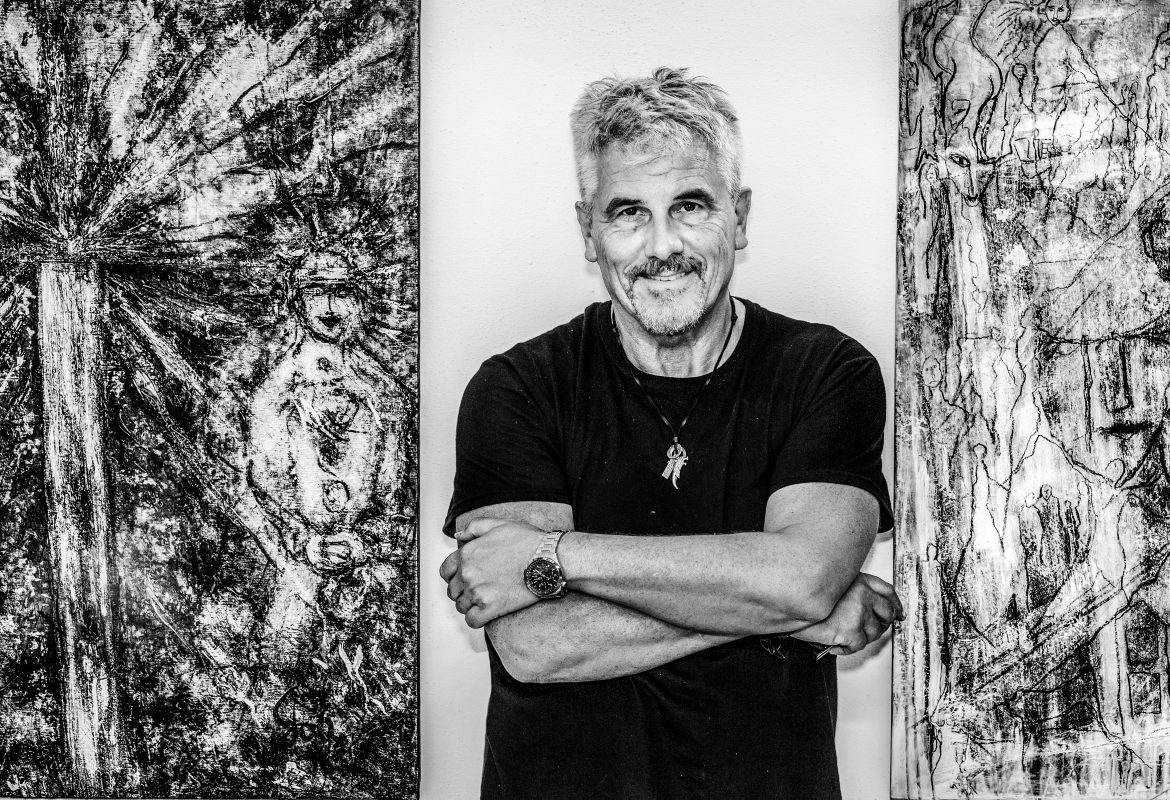 Jarl Goli is an artist from Norway having a lot of success the last couple of years as a result of hard work. All his life he has been interesting in painting, and for a long time in his youth he was drawing and painting a lot. He had however another skill as well, namely acting. He therefore applied for both The Norwegian Academy of Fine Art and The Academy of Theatre. He came in at the latter and thus the brush was put away. But that was then....

In 2017 he participated in a painting course in Spain with the Norwegian artist Ellen Hegg as the teacher. This was to be the starting point for an intense focus on art. Since then, Goli has mostly painted around the clock, most of the time in Spain, but also in Norway. In addition, he’s doing workshops, where he teaches others in his technique, which he calls Power paint. And there is no doubt whatsoever that there’s a lot of power in Jarl Goli’s paintings.

Jarl Goli is a distinctive expressionist. Expressionists are often known by using primary colours that they put on in fierce strokes. They express their feelings, and it is often the strong feelings which are expressed. Van Gogh is often regarded as the father of Expressionism, followed by Edvard Munch and the German expressionists. Matisse is another, but in France it is called Fauvism. Whatever you call it, it is the use of colours and the hefty strokes that characterize the direction. Although green is not a primary colour, it is often used because of its strong colour.

Meeting Jarl Goli in New York this spring where he was receiving his ATIM'S TOP 60TH MASTERS AWARD, I noticed the energy of this man. He told me that he always gets up at six o’clock in the morning and that he is painting until late night. He himself thinks that he had never managed this unless it was for the strict discipline he had from the theatre.

Despite much adversity the last couple of years, the artist is not a beaten man, on the contrary, this is a man full of courage and with an optimistic view of life. "Hearts Can Fly” is his slogan, and yes, with the right courage and with the right people, hearts can fly. Not least one can believe in this after a conversation with Jarl Goli.

The picture Inferno can, in many ways, be seen as an expression for the artist’s last couple of years with difficulties. The artist told me that the fact that he has started painting again, has given him the peace in mind he needed. Looking at the picture, it has a clear division given by the diagonal that goes from the lower left corner to the upper right corner. While the lower part consists of cold colours such as blue, grey and partly black, the upper part is characterized by warm colours like yellow, red and orange. Contrasts reinforce each other’s familiarity, and this is no exception. While the lower part is dark and gloomy, the upper part is of such a nature that one can get associations of fire. As known, fire is one of the four basic elements, and, looking at the picture, one can also find the others. The blue can represent both the water and the air, and we also find earth colours, and thus we have placed them all. But what happen when the basic elements not live in harmony with each other? That’s when inferno occurs. By reading the painting metaphorically, this is the expression of a human being not living in harmony, and the struggle takes place in the upper half, given by the use of colours.

There is also something sacral in connection with the image, not least because of the bright, almost white circle in the upper part of the image. Maybe the sacral feeling gets us thinking of Gaugin’s picture The Vision After the Sermon, where Jacob is struggling with an angel, who has an equally diagonal, and in spite it goes in opposite direction, Jacob’s struggle also take place in the upper part of the picture.

In addition, looking back at the previously mention circle that gave us this sacral feeling, we can, if we look carefully, find a form that may look like a human being in the lower part of the circle, a bit to the right. With this in mind, we move from Jacob’s struggle with the angel to Dante’s Divine Comedy.

Dante Alighieri’s Devine Comedy is about a thought-out journey that Dante made to the other side in Easter the year 1300. In the beginning it is a frighten Dante doing this journey, but eventually he is strengthened through his trials. Like many others, Dante was inspired by Vergil and his great epos Aeneid, and as his companion during the first part of the journey it is not surprisingly Vergil who is the guide. The first part of the journey goes through Inferno, or hell which is another word for it. As the next step of the journey, the Shields, is where Beatrice takes over as the guide, and leads Dante through paradise and all the way to the light and God.

As we can see, it is not sought to read Jarl Goli’s painting into this context, not least considering his education, which means that the artist must be well acquainted with Dante. In this context we as the viewers can read the expression as a symbol of the inner struggle the artist has been fighting over the last few years, but it also says something about a man who has not given up hope, because Dante reached the light and the Divine, which the artist also envisages the target to be.

If, as a viewer, one is not concerned with Dante, one will also be able to read Inferno as an inner struggle with strong emotions, given by both the title and the use of colours. Perhaps it can also be a comfort to see that one is not alone having a hard time from time to time.

As an actor, Jarl Goli has played the character of Raskolnikov in Dostoevsky’s Crime and Punishment, and for those who know this character one knows that an actor has to bring out the darkest of the darkness in human kind to manage to play this role. Maybe this can also be mirrored in Inferno? In this painting, made in the summer of 2018, Jarl Goli were only using ink. All his life he has been searching for the colour blue in addition with the light, and in this picture he really felt he captured the blue light. The artist also writes poems, and one of them, called OM (IF) starts with: ”Om jeg kunne male din himmel blå...” (If I could paint your sky blue). This also confirm the importance of the blue colour for the artist.

Going back to The Blue Night, it is the blue hour when the light is fading away and the darkness is approaching. It’s the time for meditation. The blue colour is also the colour for contemplation. As we can see, looking at the picture, it is the nature talking to us. We find some trees in front, and in the background we find the light, given by the whiteness above the mountains, and the yellow colour which seems to come from houses. Jarl Goli himself lived in the countryside as he grew up, and he told me that in the countryside you always will find light in the windows, no matter how dark or bright the night is.

According to Aristotle the human being is nature, therefore we can read this painting as an expression for the human being and in addition by reading it metaphorically, the house is a symbol for the soul of man and therefore you can interpret it as: No matter how difficult your life is at the moment, there will always be some light left for you.

Written by Wenche Holmedal: Art historian, educator and the editor for the website Samtiskunst.com / Contemporary Art

All photos reproduced with permission from the artist. 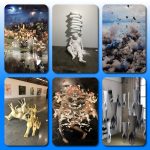 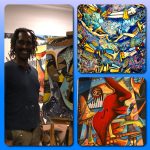